Damascus and Ankara “There is no permanent hostility in politics”… Strategic imperatives. 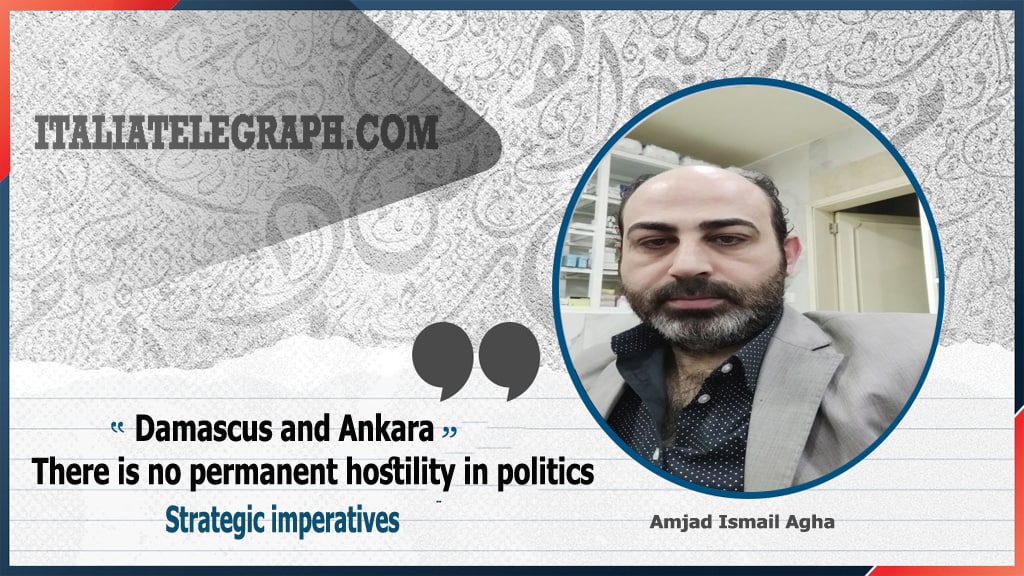 Isolated from the Syrian Foreign Ministry’s denial, the validity of the reports reported by the Turkish newspaper, Hurriyet, which talked about Turkish messages that were transmitted to Damascus before President Bashar al-Assad’s visit to the United Arab Emirates, regarding the discussions that are currently taking place within the Turkish government to exploit the Russian preoccupation with the Ukrainian war, and research For a new opportunity to create an atmosphere that calls for improving relations between Ankara and Damascus. However, there are realistic data that can be built upon to restore Syrian-Turkish relations, thus laying the groundwork for a political solution in Syria that will avoid more regional and international challenges for everyone.

It is clear that the Turkish role towards the Russian-Ukrainian war will establish a new scene in the relations between Ankara and Damascus. The current policies, with their regional and international dimensions, may contribute to a climate of reconciliation, to take new steps to restore the relationship between the two countries.

Global developments have forced Turkey to take a new political stance on the Syrian file, especially since Turkey-Erdogan’s position, in terms of approaching the Syrian crisis, has become more flexible, specifically after the calls and internal pressures that Turkish President Recep Tayyip Erdogan is subjected to by the Turkish opposition parties. And this is implicit in what the Syrian Foreign Ministry statement alluded to, when it described the Turkish reports regarding the rapprochement with Damascus, as a scandalous “media propaganda” with the approach of the presidential elections in Turkey, and in a way that reflects the political tensions between Erdogan and his opponents.

Accordingly, the essence of Turkish foreign policy and its new orientations have clearly changed since the beginning of last year. Turkish policies have been based on the partial restoration of relations with neighboring countries, and Ankara has actually begun to change the political path by opening channels of communication between it and the countries that boycotted it during the events of the “Arab Spring.” .

All of this can be placed within the framework of Turkey’s return to the “zero problems” policy, and work to establish regional cooperation that provides opportunities to activate Turkish capabilities, based on Turkey’s geopolitical position, and the need of all regional and international powers for this position and the Turkish role. In connection with this, regional and international conditions and developments, specifically with regard to the Russian-Ukrainian war, have prompted Turkey to search for a rational approach, to deal with the existing chaos in the Syrian file, and to address the concerns and challenges that frame the context of the return of Syrian-Turkish relations, and the reactivation of diplomatic options, To find a way out of the Syrian crisis at all levels; Which confirms that Ankara is reprogramming its political compass towards Damascus.

The most important factor that was established on the successor of the Turkish internal disputes, as well as the general scene in the region, gives us a clear scene, and a strategic necessity, forcing Turkey “interim” to find a solution to the Syrian file, which has become by necessity for the Justice and Development Party, which leads to a state of political stability The security and economic situation, with the containment of the bleeding situation that affected the popular base of Erdogan and the Justice and Development Party.

On the other hand, the Syrian state, based on political realism in terms of approaching developments, realizes that coordination with Ankara, in various files, especially security ones, is inevitable, as well as reopening channels of communication with Turkey, which may establish a new political scene, ending the disaster.

The truth of the matter is that the political discourse in Turkey has begun to take directions that come in their entirety in the context of the necessity of communicating with Damascus. Here, the speech of the Turkish parliament member from the ruling Justice and Development Party, Ahmed Berat Chunkar, who presented a report on Turkey’s goals and positions in the Syrian crisis, is very strong. He admitted that Turkey had supported the armed opposition and the so-called Free Syrian Army groups since the outbreak of the crisis in order to change the Syrian political system and overthrow President Bashar al-Assad, but this support did not reach any desired result, and at the end of the report it was emphasized that Ankara began to change its positions towards Damascus. Little by little, it began cooperating with Iran and Russia more seriously, and Ankara’s goals changed, and removing President Bashar al-Assad from power was no longer a priority.

Within the foregoing facts and data, it has become confirmed that there is a Turkish desire to search for paths to reach Damascus, but Ankara is still searching for a political timing that guarantees it the ability to identify with regional and international developments, and in a manner that does not affect the essence of Turkish politics that depends on staying within The balances of influential adults in regional and international issues.

All of the above confirms that the political tensions and their parts associated with the beginnings of the war on Syria no longer represent insurmountable obstacles, or the impossibility of placing them in the frameworks of rapprochement and implementation, but on the contrary. It has become necessary to search for understandings that pave the way for reformulating alliances, in order to lay the groundwork for a political road map in Syria, which would achieve gains and privileges for all in the political sense.

In conclusion, the facts and data that the Syrian interior is experiencing require new approaches for the Syrian state to take. It may seem realistic and logical to open channels of rapprochement with Turkey, as it is not in the interest of Damascus, nor of Ankara, to maintain the state of hostility in its current form, and it is more useful for Damascus to grasp the threads of the problem. , and working to move it commensurate with the Syrian interest.

The importance of the Arabic language