The Russian ruble is an economic weapon with limited effects . 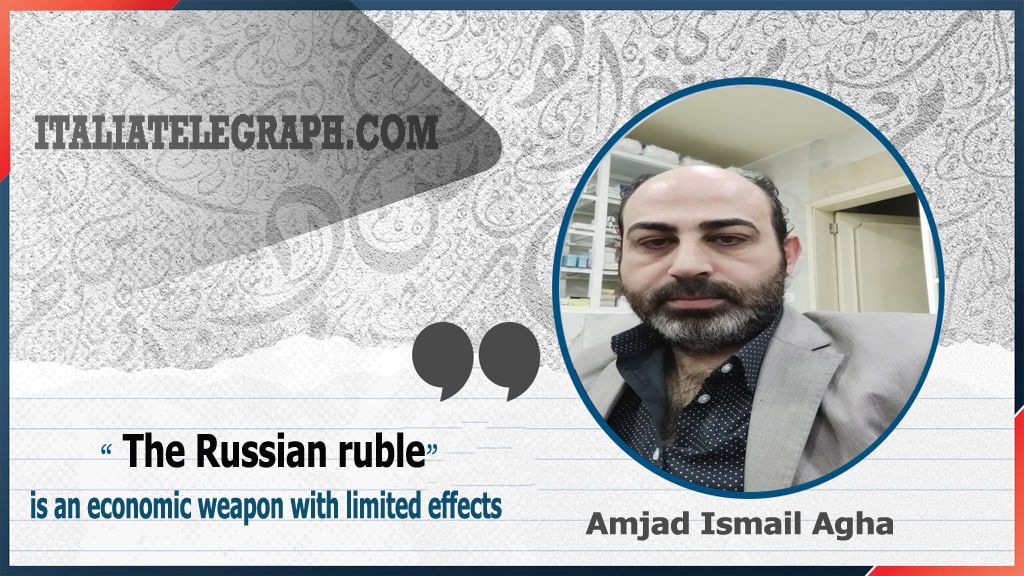 Despite its effects and actors, the military war no longer achieves results that can be invested and employed in the post-war context; The world regimes have set in mind a new tactic based on striking interests, using the means of pressure or what is known as soft war, according to which the goals and objectives are achieved. And beyond that, as it has become reckless for one country to declare a military war against another, which inflicts great damage on both sides, as well as for many years, to reconstruct the results and repercussions of the military war. .

In connection with the foregoing, there are more effective and effective means, which achieve very important political results, including what is technically known as the currency war. Currency manipulation has become a weapon with great effects, used by countries in their political and economic wars, but there are many controls related to the currency’s ability to be an economic weapon with global influences, which the Russian ruble lacks. .

The foregoing gives us a clear scene that can be built upon, in terms of extrapolating the ability of the Russian currency, to enter the club of major currencies, and to replace it as a global currency in commercial exchanges. Recently, the Russian government demanded that European countries pay for their natural gas imports from Russia in rubles. This measure aims, in its contents, to give priority to Russian monetary interests at a time of conflict and polarization between Russia and the West, which was translated by Russian President Vladimir Putin, when he made it clear that the countries targeted by this measure are unfriendly countries. .

Russian President Vladimir Putin previously claimed that Western currencies are at risk. As a result, from Putin’s point of view, it became necessary to change the method of payment to the Russian ruble, so that all active currencies of Western countries, which are considered hostile by the Russian government, will be outside the scope of Russian dealings; In this sense, the Banning the use of Western currencies in commercial transactions will guarantee Moscow its national interests and encourage the growth of the search for the ruble in the global financial market. .

In the depths of the scene, since the beginning of the Russian military operation against Ukraine, the Russian ruble has lost a lot of its value against Western currencies, mainly due to the sanctions imposed on Moscow. But because of the Russian payment policy approved by Putin, the current trend may establish a new scene, based on a significant increase in the international demand for the ruble, which supports the Russian monetary and financial security .

From the point of view of logic in reading reality, it can be said that the decision of Russian President Vladimir Putin, in terms of forcing unfriendly countries in Europe, to pay for gas in Russian rubles, is governed by two problems. :
The first is a legal problem. When it was agreed between Russia and European countries, to supply Russian gas, contracts were signed and the currency to be used for payment was determined, which is either the euro or the dollar, and therefore any change in the currency means a violation of the sales contracts, and as a result, the disputes arising from the violation of the terms of the contract, It will end in European courts, and therefore Russia, as well as the European Union countries, do not want to reach this result, which will end with stopping the flow of Russian gas, and then stopping the wheel of the economy .
The second – the truth of the matter, the European countries want gas, and if they acquiesce in Putin’s decision, they must obtain the Russian ruble, from the Russian Central Bank, but the majority of Russian banks, including the Russian Central Bank, are subject to US sanctions, and European countries cannot obtain the ruble , according to which countries importing Russian gas will not be able to pay in rubles .

In order to avoid these two problems, by Russia and the West, it was agreed that European countries would import gas by paying in euros or dollars, according to the contract signed between European countries and the Russian company Gazprom, provided that Gazprom Bank would convert euros or dollars into rubles, Then he opens an account for each company in rubles, and the account is paid for .

But within the foregoing, there is also a problem facing the Russian decision, especially since there are not enough amounts of the Russian ruble to cover the gas trade, and bypassing this problem, the Central Bank will print large quantities of the ruble, which means its depreciation, and possibly its collapse. .

in conclusion. Putin’s decision put him in a complex and complex problem, but he may be able to find the appropriate solution, but there is a challenge facing the financial system in Russia that is already crippled by US sanctions. However, in addition to the reaction to Western sanctions, it is also necessary to mention the geo-strategic value of Putin’s maneuver, the latter wanting to ensure the integration of Moscow and the Russian ruble, in the increasing process of monetary multipolarity, as more and more countries accept to trade internationally using their local currencies, as a force For energy, Moscow has the ability to strengthen the ruble, and Putin certainly will not miss this opportunity. Depending on what the coming days will reveal, the extent of the impact of these opposing factors will shape the future of the economy in general, and the Russian ruble in particular. .