The 60-year-old gave a roughly four-minute speech on Wednesday to launch a gathering of the 11-nation Economic Community of Central African States (ECCAS).

The audience comprised about 100 politicians, diplomats and journalists.

“I would like … to wish you the most cordial welcome to Libreville on the occasion of this extraordinary summit, which is devoted to the institutional reform of our community,” Bongo said from the podium.

Reform “should enable our community to adapt to the challenges of the day and strengthen its role as a pillar of the African Union,” he said.

Bongo’s health has become a closely-watched issue in Gabon, with critics insisting that his stroke has left him medically unfit to run the country.

He spoke without notable difficulty on Wednesday but paused for a few seconds between each sentence, an AFP news agency reporter said.

Bongo is the current chair of ECCAS, a 36-year-old organisation which aims to forge a common market among 11 states.

The extraordinary summit, announced with only a few weeks’ notice, aims at beefing up ECCAS’ secretariat to create a more powerful commission, similar to that of the African Union or European Union. 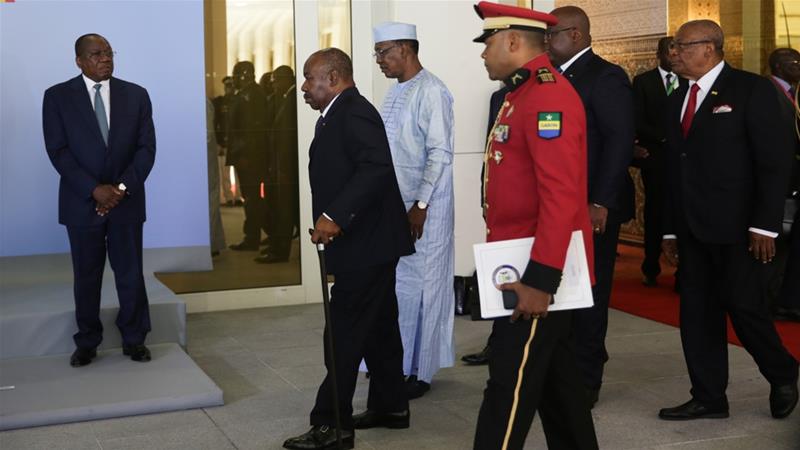 The group lags far behind similar bodies such as the Economic Community of West African States (ECOWAS) and the Southern African Development Community (SADC) in terms of regional integration.

Four ECCAS heads of state were present – Presidents Idriss Deby of Chad, Faustin-Archange Touadera of the Central African Republic, Felix Tshisekedi of the Democratic Republic of Congo and Evaristo Carvalho of Sao Tome and Principe.

Bongo, who has ruled the oil-rich equatorial country for 10 years, had a stroke in October 2018 while in Saudi Arabia, where he was hospitalised in the kingdom’s capital, Riyadh.

He was later flown to Morocco to convalesce and went back to Gabon last March, making few public appearances.

While he was convalescing, Bongo’s supporters put down a brief coup bid in January that challenged an elected family presidency that has ruled for more than 50 years.

Ali Bongo took over from his father Omar Bongo Ondimba, head of state from 1967 until he died in 2009.

Shockwaves have rippled across Gabon’s political scene in recent weeks as Bongo has stepped up his public appearances, clearly appearing to be in better health.

Former presidential cabinet director Brice Laccruche Alihanga, has been dismissed and charged with embezzlement together with three former ministers.

Thirteen senior government figures and state officials deemed to be close to Laccruche have also been placed in custody.